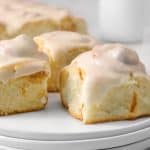 There is nothing more comforting than these Easy Cinnamon Rolls! Made from simple pantry staple ingredients, this is a pastry that any baker at any skill level can make. Who needs an expensive single cinnamon roll from the bakery when you can easily make your very own large batch and have them any time you want? Light, fluffy, sweet dough with the perfect amount of gooey cinnamon filling, topped with vanilla icing. Breakfast really can’t get better than this!

We have been making these cinnamon rolls my entire life! They are the definition of a delicious and comforting breakfast. Yeah, okay… Maybe not the healthiest thing to kick off the day, but it is the most delicious! Buttery, soft, sweet, cinnamon-y rolls with the best ever cinnamon filling AND icing on top? Seriously, count me in!

Before we actually started this blog, one of the first “recipes” we posted on our Instagram was actually THIS! Though, it was before we really knew what we were doing… It was just a photo on Instagram without the actual recipe posted below.

Hm. Yeah, I don’t know either… But here we are today! We are FINALLY sharing this.

We actually have changed the recipe over the years. Adding things, taking things out, and I can officially say that this version is seriously the absolute best that they can be! Plus, they are seriously SO easy to make.

I can remember during the months of fall and winter growing up, the house constantly smelled of cinnamon rolls. That definitely was not a bad thing. There was nothing better than waking up to the sweet smell filling the house or even coming back inside after a long day of playing outside and finding these being freshly pulled out of the oven.

For The Cinnamon Filling:

Thankfully, these cinnamon rolls are SO easy to make! First, gather and measure out all your ingredients for the dough. Now, place butter in a small pot and let melt over a low heat.

While your butter is melting, go ahead and combine sugar, salt, yeast, and two cups of flour in the mixer.

Pour in the butter/milk mixture into the dry ingredients. Mix on medium for two minutes.

Now, add the eggs and 2 more cups flour. Beat on medium speed for 2 more minutes. Turn off the mixer and change flat beater out for the dough hook. Add remaining flour and mix on low speed until just combined. Increase speed and knead until smooth and elastic, about 8-10 minutes.

Transfer the dough into a large greased container and cover. Set aside until the dough has doubled in bulk. This should take about an hour.

While the dough rises, let’s make the filling!

Add all ingredients to a medium sized bowl and, using a hand mixer, mix until thoroughly combined.

Once the dough has doubled in bulk, turn out onto a floured surface and roll out to about a 1/4 inch thick.

Spread all the filling evenly across the dough.

Using a rolling pizza cutter, cut the dough lengthwise in one inch strips. Then, cut halfway across. Roll each strip and place in a greased pan.

Cover the cinnamon rolls with a towel and set aside for about 45 minutes, or until they have doubled in bulk.

As the cinnamon rolls cool, make the icing! Combine everything into a bowl and mix until smooth. You can use the mixer or a hand mixer to do this.

You can actually freeze them separately for individual servings or all together if you’re expecting a lot of company. You can also freeze these with or without icing. I recommend freezing without icing that way it doesn’t melt back into the cinnamon roll when you reheat them!

Just leave them out on the counter or, if you saved them individually, you can pop them into the microwave.

If your cinnamon rolls didn’t rise: Check your yeast! It may be out of date.

Cinnamon rolls shrink after baking: This is totally normal! With yeast breads, as steam escapes, it’s natural for the bread to shrink a little.

Cinnamon rolls pop up in the middle: This has to do with placement in the pan. The closer the cinnamon rolls are, the more they will pop. It’s because the dough didn’t have room to expand and, therefore, the only way they could go is up!

Dry cinnamon rolls: This could be caused by two things. Over baking or too much flour was added to the dough.

When you make these Easy Cinnamon Rolls, leave a comment down below! We love hearing from you and answering any questions you might have! Also, be sure to tag us on social media and hashtag it #BakersTable. 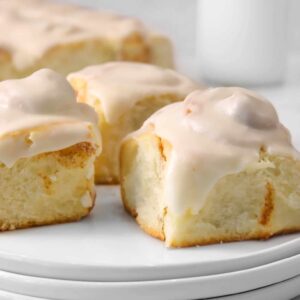 When you make this recipe, remember to tag @bakerstble or hashtag it #BakersTable!
39 shares

This website uses cookies to improve your experience while you navigate through the website. Out of these, the cookies that are categorized as necessary are stored on your browser as they are essential for the working of basic functionalities of the website. We also use third-party cookies that help us analyze and understand how you use this website. These cookies will be stored in your browser only with your consent. You also have the option to opt-out of these cookies. But opting out of some of these cookies may affect your browsing experience.
Necessary Always Enabled
Necessary cookies are absolutely essential for the website to function properly. This category only includes cookies that ensures basic functionalities and security features of the website. These cookies do not store any personal information.
Non-necessary
Any cookies that may not be particularly necessary for the website to function and is used specifically to collect user personal data via analytics, ads, other embedded contents are termed as non-necessary cookies. It is mandatory to procure user consent prior to running these cookies on your website.
SAVE & ACCEPT
39 shares
Skip to content