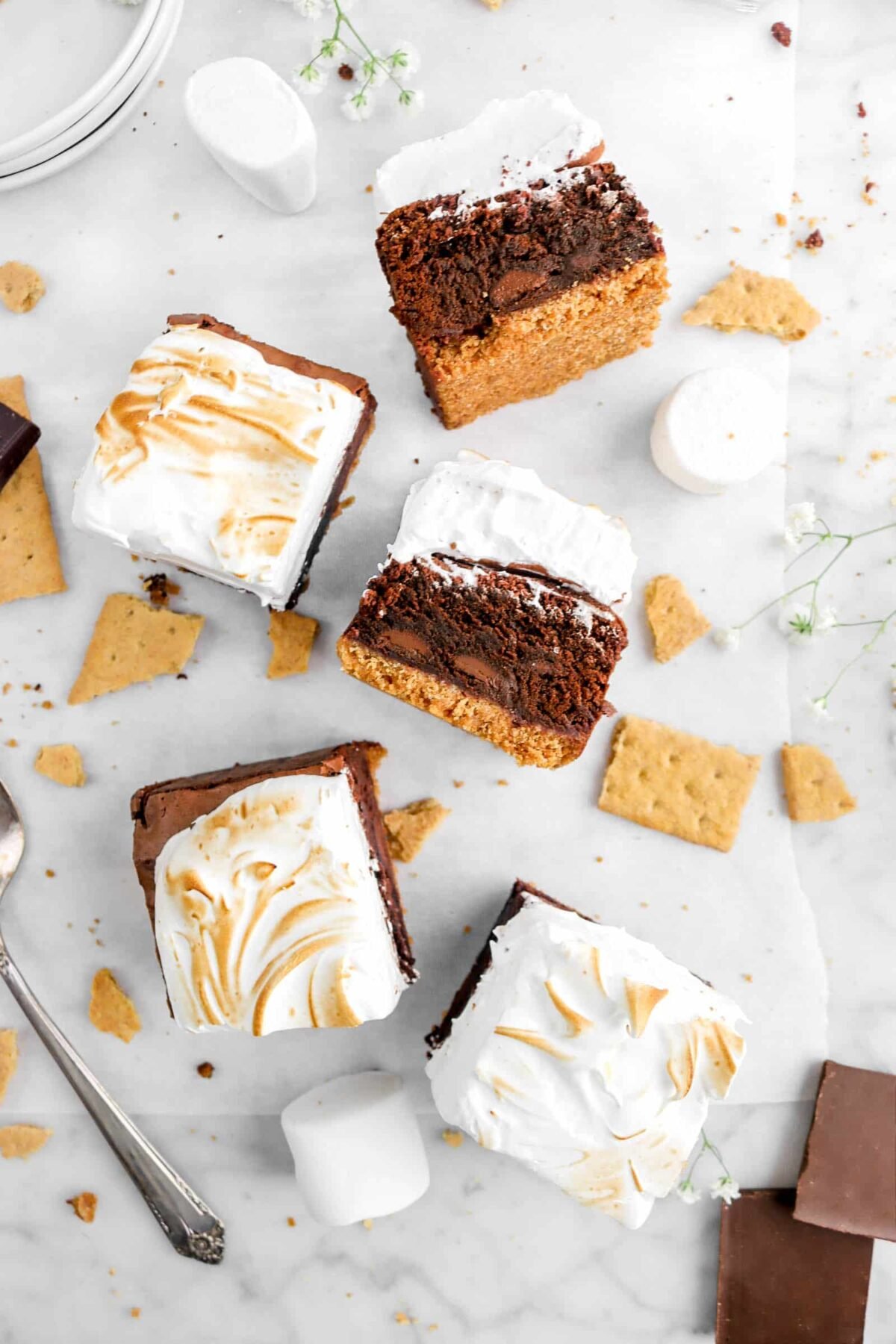 Soft, chocolate-y, decadent, and so delicious… These super easy Triple Chocolate S’mores Brownies are the summer treat you’ve been dreaming of! Think a traditional s’more, but in gooey brownie form. They’re rich, decadent, heavy on the chocolate and marshmallow, and extra fudge-y! Made with simple pantry staple ingredients, an easy graham cracker crust, homemade marshmallow fluff, and extra chocolate chips for a brownie that is seriously amazing. It’s like all the very best childhood summer memories! Every bite is slightly crisp on the edges but soft and chewy in the center. There is nothing better than these s’mores brownies! But the absolute best part about these? They’re so easy to make, use truly simple ingredients, and take only minutes to mix up and bake. They’re the perfect summer treat!

→ This post is also available as a Web Story: S’mores Brownies

There is nothing I enjoy more than a good s’more during the summer. It’s always been one of my favorite childhood treats! But, sometimes, it’s fun to do something totally different and make s’mores into something fancier and decadent.

That’s where these brownies come in!

In actuality, we were trying to make some rocky road brownies, but there was just something missing from it. So, we’re pocketing that idea for a bit, but we really wanted to share a new brownie recipe with all of you. Summer + brownies = best summer ever.

So, we really started thinking. What else could we do? Well, what screams summer more than s’mores?

And so, we landed on a s’mores brownie idea…but it wasn’t all that easy. Sometimes it’s the most simplistic recipes that give up problems in development!

The first batch of brownies were perfectly baked, but the marshmallow fluff we bought just…slid off the brownies. So, time to rethink!

From there, we landed on the idea of making Italian meringue because it’s basically marshmallow fluff. Just stiffer! That worked like a dream, but now the brownies were severely under-baked. Like, river of chocolate in the middle. They still tasted good, but they needed about 10 more minutes in the oven. Oh, AND the crust? It fell off completely..?

So, we tried again! Finally.

You couldn’t ask for a better brownie to celebrate the summer!

For The Graham Cracker Crust:

For The Marshmallow Fluff:

Turn out the graham cracker crumbs into a lined 8 inch square pan. Pack down firmly. Bake for 10 minutes at 350 and set aside.

In a small saucepan, melt butter and semi-sweet chocolate. Set aside to cool down.

In the bowl of a stand mixer, combine the eggs, sugar, and vanilla. Beat on high speed for 10 minutes.

In a clean bowl, whisk together the flour and cocoa powder. Set aside.

Pour the melted chocolate mixture into the egg mixture with the mixer running on low speed.

When combined, add the flour and cocoa powder mixture.

Stir in the chocolate chips.

Pour the brownie batter over the graham cracker crust and bake at 375 for 40 minutes, or until the brownies are done.

In a clean bowl of a stand mixer, beat egg whites to medium peaks.

Combine the sugar and water in a small saucepan and cook over medium low heat, stirring constantly, until sugar melts. Once melted, stop stirring and brush down the sides with a pastry brush dipped in water. Leave mixture alone until it reaches 246-250 degrees. With mixer running, pour hot sugar mixture slowly into beaten egg whites. Beat until the mixture is cooled.

What Kind of Chocolate Should I Use?

With a recipe that calls for multiple chocolates, it can be a little overwhelming! Don’t worry though. We have you covered. For this recipe, it’s best use to a semi-sweet chocolate for melting and pouring into the brownies (about 60%), while having a bittersweet chocolate (about 70%) is best for the chips on the inside!

For the cocoa powder, you can use either natural or dutch processed! Just make sure you’re using unsweetened cocoa powder.

How To Tell When A Brownie Is Perfectly Baked

Brownies are one of the hardest things to gauge when they’re done! Why? Well, because you still want a fudge-y like center, but not underdone. You also don’t want it too cake like, either!

So…how can you tell when a brownie is perfectly baked? Well, the trick is actually all in the crust and timing.

Always bake in the allotted time stated in the recipe card. Any more may cause an over-baked brownie, any less may be under-baked.

Another thing is when the crust is just starting to pull away the top is just beginning to crack. From there, it should be perfectly baked! If you aren’t too sure, you can always use a cake tester or a tooth pick to determine if it’s done.

With three test-bakes under our belt with this recipe, we can confidently tell you that italian meringue is the way to go! The difference between these three are stark. So, let me explain.

When we originally made this recipe, we used a mixture of little and jumbo marshmallows on top. While it looked okay, eating it was a little…underwhelming. The marshmallows didn’t stay soft and gooey like we wanted them to. So, while this could work if you didn’t want to make meringue, it wasn’t our favorite.

Next, we tried store-bought marshmallow fluff. While this stayed soft and gooey after toasting, the fluff literally melted off the brownies. They tasted great! Just kinda looked a mess.

Finally, we arrived at a super simple Italian Meringue. This was everything we could ever hoped for it to be! It was soft, fluffy, gooey, toasted beautifully, and held its shape even after slicing.

You can store these brownies in the fridge after baking for about 3-5 days. If you like a warm brownie, you can heat it in the microwave for a few seconds!

When you make these Triple Chocolate S’mores Brownies, leave a comment down below! We love hearing from you and answering any questions you might have! Also, be sure to tag us on social media and hashtag it #BakersTable. 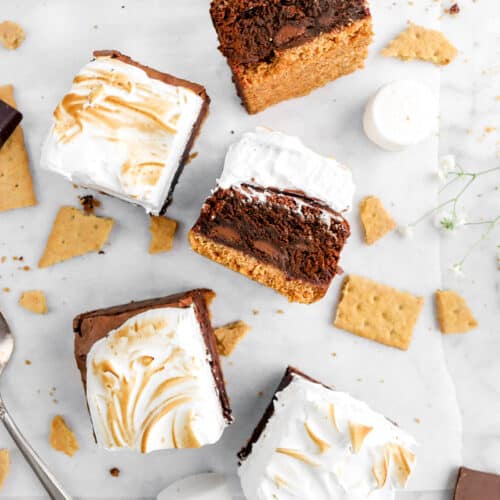 When you make this recipe, remember to tag @bakerstble or hashtag it #BakersTable!
68 shares

This website uses cookies to improve your experience while you navigate through the website. Out of these, the cookies that are categorized as necessary are stored on your browser as they are essential for the working of basic functionalities of the website. We also use third-party cookies that help us analyze and understand how you use this website. These cookies will be stored in your browser only with your consent. You also have the option to opt-out of these cookies. But opting out of some of these cookies may affect your browsing experience.
Necessary Always Enabled
Necessary cookies are absolutely essential for the website to function properly. This category only includes cookies that ensures basic functionalities and security features of the website. These cookies do not store any personal information.
Non-necessary
Any cookies that may not be particularly necessary for the website to function and is used specifically to collect user personal data via analytics, ads, other embedded contents are termed as non-necessary cookies. It is mandatory to procure user consent prior to running these cookies on your website.
SAVE & ACCEPT
68 shares