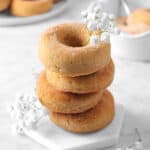 Embracing an early start to delicious Fall bakes with the easiest Cinnamon Spiced Baked Donuts. Light and airy homemade donuts flavored with hints of ground cinnamon and vanilla, baked to perfection, and coated lightly with cinnamon sugar. These are so easy to make, need only pantry staple ingredients, and requires very little hands on time. Simply make up the spiced batter, pipe it into pans, and bake until the donuts are puffed and golden. Coat each warm donut with cinnamon sugar and serve with your favorite cup of coffee. Truly the perfect way to start your day, enjoy as a sweet snack, or serve with dessert! SO GOOD.

If there is one thing that we love more than anything in this family, it’s donuts. They are little bites of fluffy, perfectly sweetened heaven. Add a little Fall/Autumn flare to the mix and you really have a winner!

That is exactly what these donuts are.

Though, I have to admit, there is really no reason you can’t make these all year long. Cinnamon spiced anything is delicious no matter what color the leaves are or what the temperature is outside.

And, if you want it to feel like Fall, turn on your air conditioning and snuggle up with these donuts and a mug of cider.

But realistically, these donuts are ah-mazing for any time of year. You don’t always need a chilly day to begin with the spiced bakes. Especially when they are as good (and easy!) as these!

In a large bowl, whisk together the flour, salt, cinnamon, and baking powder. Set aside.

Beat together the butter and the sugar in a stand mixer until light and fluffy, about 2-3 minutes.

Add in the egg and mix on medium-high until the egg is incorporated with the butter mixture.

Alternate adding the flour mixture and milk into the butter mixture. Make sure you begin and end with the flour.

Slowly stir in the vanilla.

Spoon the batter into a large piping bag and pipe into a greased donut pan. Bake at 350 for 20-25 minutes, or until the donuts test done. While the donuts are baking, mix together cinnamon and sugar.

When the donuts finish baking, turn them out while they are still warm and coat the donuts with the cinnamon sugar.

Let the donuts cool and enjoy!

What To Serve With Cinnamon Donuts

Once the donuts have cooled, you can easily store them in a large freezer safe bag, and keep them in either the freezer or fridge! They reheat so well and keep for months in the freezer.

Just set out onto the counter to let the donuts come to room temperature, or pop them into the microwave for a deliciously warm donut.

When you make this Cinnamon Spiced Baked Donuts, leave a comment down below! We love hearing from you and answering any questions you might have! Also, be sure to tag us on social media and hashtag it #BakersTable.

When you make this recipe, remember to tag @bakerstble or hashtag it #BakersTable!
97 shares

This website uses cookies to improve your experience while you navigate through the website. Out of these, the cookies that are categorized as necessary are stored on your browser as they are essential for the working of basic functionalities of the website. We also use third-party cookies that help us analyze and understand how you use this website. These cookies will be stored in your browser only with your consent. You also have the option to opt-out of these cookies. But opting out of some of these cookies may affect your browsing experience.
Necessary Always Enabled
Necessary cookies are absolutely essential for the website to function properly. This category only includes cookies that ensures basic functionalities and security features of the website. These cookies do not store any personal information.
Non-necessary
Any cookies that may not be particularly necessary for the website to function and is used specifically to collect user personal data via analytics, ads, other embedded contents are termed as non-necessary cookies. It is mandatory to procure user consent prior to running these cookies on your website.
SAVE & ACCEPT
97 shares
Skip to content