American Buttercream is one of the easiest frostings to make! It only requires four super simple ingredients and works for almost anything you can think of!

To be totally honest with you, I grew up calling American Buttercream “frosting”. I didn’t know there were so many different kinds of buttercream as a kid! It wasn’t until a few years ago that I really learned the differences. There’s Swiss, French, Italian, and American!

I mean, how awesome is that?! Four different kinds of buttercream, all just as unique and delicious as the next.

The secret, so I’ve learned, with making American Buttercream is beating it on a high speed until it’s light and fluffy. You can literally do anything with this stuff!

Though, I kinda prefer to grab a spoon and take a couple bites. It’s seriously that good!

How to make american buttercream

The best part of American Buttercream is it’s simplicity. The first thing you need to do is get your butter out early so it has time to soften! The key to this buttercream is having room temperature butter.

Once your butter is at room temperature, get the rest of your ingredients out and measured. This will make your life easy as you go!

Next, add the butter to the mixer. Beat on a high speed until it is light and fluffy. This will take about 3-4 minutes.

Slowly add the powdered sugar one cup at a time. Make sure to beat it well after each addition!

Now add the cream and vanilla and beat until well incorporated.

When you make this American Buttercream recipe, leave a comment down below! We love hearing from you and answering any questions you might have! Also, be sure to tag us on social media and hashtag it #MSDHospitality. 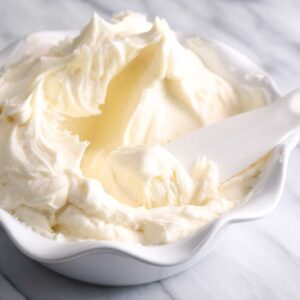 When you make this recipe, remember to tag @bakerstble or hashtag it #BakersTable!
19 shares

This website uses cookies to improve your experience while you navigate through the website. Out of these, the cookies that are categorized as necessary are stored on your browser as they are essential for the working of basic functionalities of the website. We also use third-party cookies that help us analyze and understand how you use this website. These cookies will be stored in your browser only with your consent. You also have the option to opt-out of these cookies. But opting out of some of these cookies may affect your browsing experience.
Necessary Always Enabled
Necessary cookies are absolutely essential for the website to function properly. This category only includes cookies that ensures basic functionalities and security features of the website. These cookies do not store any personal information.
Non-necessary
Any cookies that may not be particularly necessary for the website to function and is used specifically to collect user personal data via analytics, ads, other embedded contents are termed as non-necessary cookies. It is mandatory to procure user consent prior to running these cookies on your website.
SAVE & ACCEPT
19 shares